Game On for Employee Gamification

While speaking at a recent HR conference in Vegas, I had occasion to meet Jane McGonigal, game designer, speaker, author, and probably the world’s biggest advocate for gamification, the idea of adding game incentives like points and prizes to non-game activities.

While within the HR community gamification is still catching on (I find a number of my clients don’t even know recognize the word) gaming, in all forms, is incredibly popular. When the latest Call of Duty video game was released in November, one in four workers called in sick. Look at it from a productivity standpoint: The amount of hours it took to create all of Wikipedia’s content in 12 years…is spent every three weeks playing Angry Birds.

During Jane’s keynote speech, she cited the 2012 Gallup study that found that 71% of American employees aren’t fully engaged in their work, making it “impossible to innovate” and costing $30 billion in lost productivity annually.

It’s no surprise that she believes gamification can help. Evidently she’s
not alone. A study by gamification company Gigya showed that gamification increases website engagement by 29%, website commenting by 13%, and social media sharing by 22%. Here are some recent employee gamification success stories.

Motivating employees
Risk Management Services recently turned an internal re-branding into
a trading card game. “Another email or intranet page just wasn’t going to get employees on board,” Vice President of Talent Acquisition and Employee Engagement Amelia Merrill told IABC. “This contest was fun and different from anything we have ever done.” Merrill said the initiative was a “smashing success.”
Orientation and onboarding
Recruitment marketing agency Maximum recently won a Creative Excellence Award for Best Interactive Media for its Deloitte China Virtual Tour campaign. Maximum virtually mapped Deloitte’s offices in Beijing, Hong Kong, and Shanghai, allowing job-seekers to explore every department – and get a firsthand look at what working at Deloitte China is really like. More than 20,000 job-seekers took part in the tour’s game feature, Green Dot Mission, and shared their scores on China’s most popular social networks. 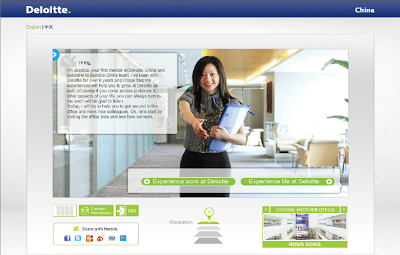 Health and wellness
Aetna recently partnered with social media company Mindbloom to create an enhanced version of Mindbloom’s Life Game, an online social game for personal wellness. Players grow an on-screen tree by attaining personal goals, ranging from health to relationships to finances. According to Forbes, activities include “substituting water for soda, taking the stairs to the office, cleaning your room each day, or simply thanking a friend.” Players earn virtual rewards while making progress in their real lives.

Employee referrals
Just last month, Herd Wisdom launched Most Wanted, a mobile app that gamifies the employee referral process. How? “Every action – from choosing an avatar to sharing a job posting – earns points and get participants in the running to win giveaways from Herd Wisdom,” the
company says. The game offers “instant gratification,” since employees can earn points and prizes before they refer anyone, and features funny animated scenes to keep them engaged. Mobile apps like Most Wanted turn social sharing and mobile gaming, which just about everyone likes, into a talent pipeline for any company.

Are you ready to gamify your careers site, social recruiting channels, employee referral program, or other HR initiatives? Contact Brandemix and it’s game on.