Everyone is talking about Pinterest. The social sharing site has grown by 329% over the last three months…and by 4,000% over the last six months! Clearly, people love it. So now the brands move in.

Or do they? I’ve been researching Pinterest — and using it myself. And while Pinterest has some great features, it may not be for every brand, at least right now. Here are four reasons why your brand should be on Pinterest…and four reasons why it shouldn’t.

Pinterest is clean and simple. The Pinterest interface is incredibly easy, even for non-technical people. Because comments and replies are downplayed, the images take center stage. If other users like what you’ve posted, they can either “like” it or “repin” it; commenting is optional. So you can set up a board, or share others’ images, with just a few clicks.

Pinterest is great for SEO. With so much traffic, Pinterest accounts are rising in Google rankings. You can take advantage of this by adding keywords to your “About Me” profile. Add your location to help local customers find you. Even your pin boards can help your search ranking; try titling them with your field, location, products, or type of business.

Pinterest leads to better conversion rates. Pinterest is perfect if your brand involves consumer products. A pin board is basically a catalog. If users like a product and see that others like it (via likes, repins, and comments), they can then click on the image and be taken directly to an e-commerce site. It’s the least amount of steps from seeing an item to buying it.

Pinterest is about what people love, not what they had for breakfast. On Pinterest, people pin crafts. They pin hairstyles they’ve created and desserts they’ve baked. This makes the site much more of a shared community than the text updates of Facebook, Twitter, and Google+. Users also pin items that they want or just bought, which gives brands a good opening for users to engage their products. 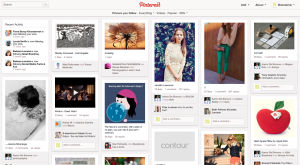 Pinterest doesn’t move the needle for service brands. The site does lead to sales of clothing and crafts, but it has virtually no referral rate for photographers, contractors, or consultants. If your company is service-oriented, you’re better off building relationships with customers on Facebook and Twitter, which allows for more dialogue between parties.

Pinterest only works for visual brands. This is related to the first point. Pinterest is about sharing images, which can be hairstyles or clothes or photographs or infographics. But if you’re an accounting firm or a wireless communications company, what are your visuals? Your brand is better conveyed through words and numbers on a blog than pictures on Pinterest.

Your audience might not be there. A recent TechCrunch study found that 97% of the fans of Pinterest’s Facebook Page are women. While that doesn’t translate exactly to Pinterest’s users and viewers, clearly the site has a major bias towards females. That works great for lifestyle and beauty brands, but not so well for, say, sports. I think men will eventually discover the site (and that “Pinterest for men” clones are doomed to fail), but keep in mind the current gender disparity when considering whether Pinterest is right for your brand.

Whether you use Pinterest, and how you use it, is up to you. If you’d like help in integrating this hot new site into your social media or web marketing efforts, feel free to contact me. My interactive branding experts are standing by.