I’ve mentioned it in the past, but now it’s out of beta and ready for the spotlight: It’s theSocial Recruitment Monitor™,the first online tool that measures the engagement, reach, and success of brands’ social media recruiting efforts. Along with rankings of comments, retweets, video views, and the like, the SRM also includes two proprietary scores.

Engagement Ratio (ER) is a formula based on amount of posts, amount of interaction, and amount of fans/followers. Community Interaction (CI) measures fan/follower interaction with the employer and with each other. These values, along with popularity and activity, combine for an SRM Index score.

It’s an ingenious way of looking at social recruiting. For example, right now, Amtrak’s careers Twitter has the highest Index score in the country, 54.24, well ahead of Northrop Grumman’s score of 45.81. Even though Amtrak has fewer followers and retweets than Northrop, its tweets, replies, and follower growth make combine for a higher total score.

The Social Recruitment Monitor™ lets you shuffle the rankings however you want, so if you’re only interested in amount of total retweets, for example, just click on the Retweets column and, voila, the Air Force Reserve now jumps to the top, with 558 – and Amtrak drops to 27th.

Here are a few more fun facts I learned while exploring the SRM:

·  One of the biggest percentage increases in follower count was USAA, which rose by 8.5% to 1,104 followers.

·  Kimberly-Clark posted the most status updates on Facebook last week: 37, an average of five every day. But Union Pacific had the most Facebook comments, 375.
·  Even though MGM Resorts only posted six status updates on Facebook last week, those posts generated 78 likes and three comments, giving the hotel company the top SRM Index score of the week (43.45).
·  17 of the 20 top-scoring companies on LinkedIn have a Careers tab on their company page, a premium upgrade. The three that don’t? Union Pacific, Amtrak, and Walt Disney ABC, which also posted the most updates on LinkedIn last week, 17.
·  The employer with the most recruiting content on YouTube is FedEx, whose playlists add up to almost seven hours of footage. General Motors, in second place, has more than five and a half total hours.
·  FedEx also has the most total videos, but who has the most views?The US Coast Guard, the only organization on the list with more than one million video views. 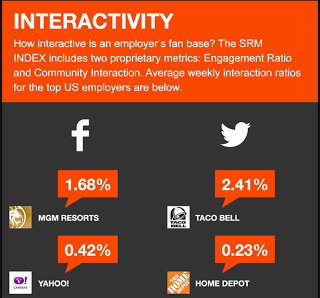 The Social Recruitment Monitor™ was created by Maximum, a global employer branding and recruitment marketing agency. The CEO, Ed Barzilaij, told me, “Just having a social recruiting presence is not enough. An employer can only know if they are meeting their goals by monitoring, measuring, and comparing.”
The SRM is free. It contains scores for a number of other countries, including the UK, Brazil, and China. You can even add your own organization to the list and compare your social recruiting with some of the best in the world.
If you’ve been looking for ways to get internal support for your social recruiting efforts, this free online tool provides a look at your competition along with simple metrics to gauge your effectiveness. Try it and see what you discover.

And if you want to improve your rankings, drop me a line. My agency, Brandemix, has a long history of social recruiting success and we love sharing our expertise.