Social Media PR Disasters: The Kansas City Chiefs Get Tackled For A Loss

Posted on October 1, 2012 by Jason Ginsburg | Leave a comment

I’ve showed you some pretty big mistakes in the past, but this one is a doozy. It breaks so many commonsense social media rules that it almost seems like an urban legend. But it really happened, to an NFL franchise, which proves it can happen to anyone. 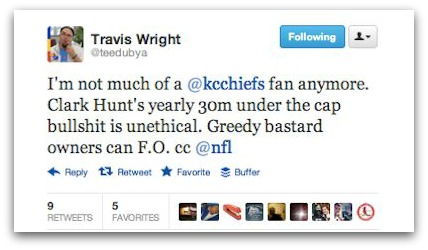 Crude? Yes. Rude? Sure. But this is football, and every team, from the Super Bowl champion Giants down to the…well, the Chiefs, has experienced vitriol like this. But rarely do teams actually respond.

The Problem
The Chiefs responded. Wright got this direct message on Twitter and took a screenshot with his phone: 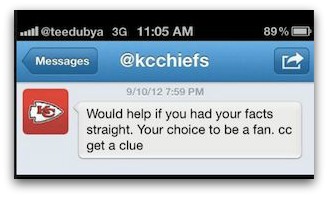 Then, for good measure, the Chiefs blocked Wright’s Twitter profile, so that their tweets would no longer show up in his feed. A very odd thing to do to someone the franchise called a “fan.” Wright shared their insulting message with his 125,000 followers (which is more than the Chiefs have) and posted it on Reddit. The incident quickly went viral.

The Result
The next day, the Chiefs apologized: 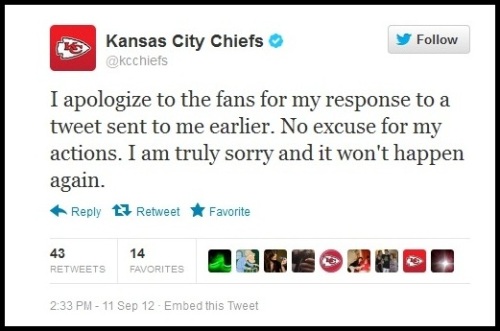 The Takeaway
The Chiefs botched this about as badly as possible. Here’s a step by step guide to ensure you don’t make the same mistake.

– Don’t Insult Anyone Publicly
I probably don’t have to say this, but you should never tell a fan, customer, employee, job-seeker, or donor to “get a clue.” That was first down.
– Don’t Insult Anyone Privately
I suppose the person running the Chiefs account thought it was safer to send something mean as a direct message, so no other followers would see it. But just about every device can take screenshots, so that strategy only delayed Wright’s retaliation for about 30 seconds. Second down.
– Don’t Block Anyone
When you block someone on Twitter, you prevent them from seeing your tweets. It’s such a silly punishment that it looks juvenile. And it’s ineffective, because your “victim” can just visit your public Twitter profile. And because the Chiefs didn’t unblock Wright when they issued the apology, he didn’t see it in his feed. That brings up third and long.
– Don’t Use The First Person Singular
That is, if you weren’t using it in the first place. Whoever runs the Chiefs’ Twitter (and that person[s?] has never been revealed) usually refers to the team as “we” or as “the Chiefs.” But the apology said “I apologize,” which conjures the image of one single guy at a computer. It also separated the Twitter manager from the organization; why weren’t the Chiefs the ones apologizing? “We’re sorry” looks a lot better than “I’m sorry” – especially since we don’t even know who the “I” is. Fourth down and time to punt.
– If You’re Going to Respond, Actually Respond
Lost in the profanity was that Wright was bringing up a valid point about how the Chiefs’ owner spends money on players. But the response was that Wright didn’t have his facts straight and should “get a clue.” So what are the facts? Why didn’t the Chiefs point Wright to the correct information? If you’re going to respond to such an angry post – and you don’t have to – at least take the conversation somewhere constructive. All the Chiefs did was make a fan mad. That’s horrible customer service. So I guess you could say the punt was blocked and returned for a touchdown.
This whole firestorm took place within 24 hours and involved only three tweets. But the damage done to the Chiefs’ brand will last a long time. This is another reason to let a trained communications, marketing, or HR professional run your social media profiles. If you don’t have one, we’d be happy to help.